Students at Beijing’s Tsinghua University gathered last weekend to vent their fury at China’s zero-Covid policies. But discontent on the campus was also bound up in the country’s economic direction.

“Because of the lockdown[s], the economy stagnated, and my family’s financial situation also deteriorated,” said a student at the Tsinghua protest.

“If the economic situation is poor, it may be difficult for my parents to pay for my study abroad,” she added. “The Covid policy will affect my future choices.”

Young people in China, who were at the heart of a nationwide wave of demonstrations after a fatal fire in the western city of Urumqi was blamed on a lockdown, face a bleak economic outlook. Youth unemployment this year touched its highest level on record.

China’s broader economy is now at one of its weakest junctures in many years. While Xi Jinping’s zero-Covid policies, which aim to eliminate all infections of the virus, helped insulate the economy in 2020 and early 2021, they have imposed huge costs this year.

A series of lockdowns amid outbreaks of the Omicron variant has crippled consumption and helped to push growth below an official target of 5.5 per cent that was already its lowest in decades.

One of the clearest impacts has been on youth unemployment, which hit 20 per cent in July shortly after the lockdown of Shanghai. It has remained close to that level for months, in contrast with general unemployment at 5.5 per cent. The metric, which the government began recording in 2018, has risen sharply since hovering at about 12 per cent before the pandemic struck.

“Younger people are the most vulnerable in the labour market because they have no experience,” said Larry Hu, chief China economist at Macquarie, who suggested the high rate of joblessness was a result of broad-based economic weakness.

In Shanghai, many of the most vocal participants in the weekend’s protests were young people. One student cited the youth unemployment figure specifically. Others referred to political ideals, including the impact of the measures on freedoms, citing slogans from a banner hung on a Beijing bridge last month.

The economic impacts of zero-Covid have been widely felt. In Shanghai, a two-month lockdown in the spring had a debilitating effect on businesses that must still contend with strict measures to curtail the virus. These include a track-and-trace system that poses the daily risk of quarantine to anyone who comes in contact with a positive case.

For young people, this has come alongside an already challenging working environment that entails long hours and tough competition. Josephine Li, who works in marketing in Shanghai, said she began working as a freelancer in August 2020 to provide some release from the pressure of her workload.

But after the lockdown this year, her earnings shrank by about 30 per cent, and in August the company she was working with cancelled a planned contract for full employment.

For other young people, the protests have stirred deep questions about their role within the economy. One 26-year-old tech worker in Shenzhen, who asked to be referred to by the name Ella, rushed to a demonstration on Tuesday but soon left after she saw police mustering. 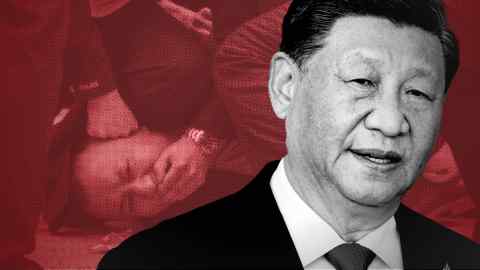 “I am not without a job and care about making money,” she said. “But I feel deeply that I have been controlled by an invisible and powerful force in the past few years.

“We don’t study and work hard to become marionettes,” she added.

Economic weakness continued across the manufacturing sector in November, according to purchasing managers’ index data released on Thursday, a day after the government appeared to make some concessions to its Covid approach as daily infections continued to number into the tens of thousands.

Policymakers are also grappling with a property crisis that has been creating anxiety for more than a year.

A police presence in Shanghai and elsewhere is set to deter a repeat of last weekend’s displays of dissent, with the government pledging to crack down on “hostile forces”. But there are warnings that economic discontent, rather than frustration over Covid policies, could drive further demonstrations.

“China’s economy is likely to slump, and the problem of the large gap between the rich and the poor will become prominent,” said the Tsinghua student. “There is likely to be major social unrest.”

Updating your PAN Card through KYC could become a simplified task, thanks to a proposal by the Finance Minister N. Sitharaman proposed in the Union Budget 2023. Highlighting the need…