A great competitor forges his reputation in the greatest contests. The greatest of all comes along once every four years — and Neymar just lost it. In Brazil’s recent elections, its star footballer endorsed defeated far-right president Jair Bolsonaro, even dancing to a campaign jingle.

The eventual victor, leftwinger Luiz Inácio Lula da Silva, had his own explanation: “I think he is afraid that if I win the election, I will find out what Bolsonaro pardoned from his income tax debt.” Neymar has denied this, saying the issues were concluded before Bolsonaro came to power in 2017.

In Qatar, starting with Brazil versus Serbia on Thursday, Neymar is dancing in another competition. At 30, this may be his last shot at winning Brazil’s sixth World Cup. He has already posted an Instagram picture of the country’s crest bearing the sixth star. This is the best Brazilian team he has played in, he says.

The coach, Tite, calls Neymar their “bow and the arrow”. The playmaker is surely the most gifted player at the tournament after Lionel Messi — just watch the recent video of him controlling a ball dropped by a drone from 35 metres. But he is now a different footballer than the poor kid from the port town of Santos who emerged a decade ago.

Early Neymar was a stick-thin dribbler who either did something brilliant or lost the ball. Coaches often stuck him on the flank to minimise the risks of his actions. But with age, injuries, weight-training and some hedonistic pleasures, he has thickened.

Late Neymar dribbles less and has evolved into a midfield playmaker: he has become the number 10 he always wore for Brazil. Tite says that any coach who persists in playing him on the wing is “a donkey”. In central midfield, Neymar has the maximum passing options and can keep popping up in front of goal. He only needs two more goals to equal Pele’s record of 77 for Brazil.

With the recent flood of Brazilian attacking talent, he also finally has forwards worthy of his passes. Watching him feed Vinicius Jr or Raphinha could renew the Brazilian tradition that all football fans carry in their heads.

It would be wrong, though, to understand Neymar as all about winning. Whereas Messi aims for pure functionality, the Brazilian is one of the only players who even at a World Cup expects to express himself.

Receiving the ball, he often does the thing that every youth coach tells children not to: he tries to beat opponents from a standing start, ideally humiliating them while he’s at it. It’s a near-impossible feat that he regularly manages, but when stationary, he gives defenders the perfect kicking target. The most fouled player in Europe’s biggest leagues, he’s always writhing on the grass in pain. People who call him a crybaby ignore the unnecessary bravery with which he plays.

He does it because, like many Brazilians, he sees football as an aesthetic performance, almost a dance. He says, “Put on some music that gets you in the mood, and a Brazilian might be sitting down, but he’ll always dance a little. I come from a family that loves samba. I think I have a little Brazilian ginga [broadly: a sensual shimmy], something in the hips.”

The legendary Brazilian winger Garrincha saw opposing defenders as interchangeable nonentities, whose job was to act as his straight men — “Joãos” (Johns), he called them — and Neymar plays in that spirit. It outrages him when some João spoils his dance with a foul.

At times he relies on effortless displays of his talent but he arrives in Doha after a brilliant autumn with Paris Saint-Germain, unusually fit and able to do the defensive running he generally avoids. It will help him that Brazil need him less than at previous tournaments. 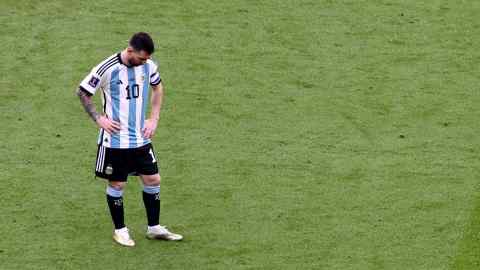 With gifted ballplayers abounding, teammates no longer frantically seek him out wherever he is on the field — many flowing passing moves happen without him. And they seem to have forgiven him for breaking their dressing-room pact that no one would campaign for any presidential candidate.

Before his first World Cup in 2014, the shy, smiling young man told me his memory of what remains Brazil’s last triumph, in 2002: “I woke up before dawn to watch the final at home. I even had [Brazilian striker] Ronaldo’s haircut. I watched with my parents and sister, everyone together. Then we went to my granny’s house, we had a barbecue, everyone shouting ‘We’re champions!’ like real fans. Everyone says winning the World Cup is an indescribable joy. It’s what I want more than anything.”