Republicans fell further behind Democrats in grassroots fundraising in the midterm elections, with some analysts blaming the party’s reliance on a few rich megadonors for its relatively poor performance.

According to a Financial Times analysis of Federal Election Commission and OpenSecrets data, Republicans secured millions of dollars more in outside spending than Democrats this year. The party’s biggest donors wrote significantly bigger cheques than their counterparts on the Democratic side, based on filings as of October 19.

Yet Democrats were able to raise more small-dollar donations in the handful of key states that allowed them to hold on to the Senate — a potential barometer of voter enthusiasm for the party in those states.

The Republicans won control of the House, but by a much thinner margin than expected.

“When people feel like they have skin in the game, they’re buying into a candidate. They’re going to be more likely to show up and vote,” said Edward Erikson, a progressive political consultant who specialises in combating the impact of big money in politics.

In Pennsylvania, Democrats raised two and a half times the small-dollar donations that Republicans amassed ahead of the victory of progressive Democrat John Fetterman over Mehmet Oz, the former television doctor backed by Donald Trump.

Democrats also raised more in small dollar donations in Arizona, Nevada and Georgia, although by slightly smaller margins. Arizona and Nevada’s Democratic Senate candidates both won their races outright, while Georgia’s Democratic Senate candidate, Raphael Warnock, will face Republican opponent Herschel Walker in a run-off next month owing to the close margin of the contest.

Since the Supreme Court decided the “Citizens United” case in 2010, individuals have been free to give unlimited amounts of money to super Pacs, or political action groups, supporting different candidates.

Though the sums have become astronomical, political analysts said it was not always obvious that the money was being effectively used, as evidenced by the performances of some of the Republican megadonors’ picks in the midterms.

“It’s always shocking how much of that money is not well spent,” said Meredith McGehee, an expert studying the intersection of money and politics in Washington.

“You see these outside groups come in and it can sometimes irritate the candidate, because the super Pac will come in with the wrong message or an ineffective message, or they’ll spend it on races where, you know, the person didn’t have that chance.” 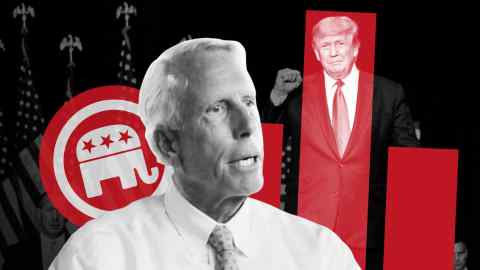 For Republicans, the problem in some races was not just the dearth of small-dollar donations, but the preponderance of a handful of megadonors who entered Republican primaries early with big bets, elevating candidates that might not have gone on to win their nominations without such largesse.

Peter Thiel, the billionaire venture capitalist, gave $17.5mn to Blake Masters in Arizona and $15mn to JD Vance in Ohio — both of whom previously worked for him — to win Republican Senate seats in those states. Vance ultimately won his race, but Masters lost to Democrat Mark Kelly.

Richard Uihlein, another one of the GOP’s biggest donors, gave $3mn to Masters and $1mn to Walker in Georgia. With wife Elizabeth, the Uihleins gave $77mn to Republicans this election cycle. Citadel’s Ken Griffin gave over $8.8mn to David McCormick, the Pennsylvania Republican Senate candidate, who failed to advance past his primary.

Uihlein and Griffin were also active in the Illinois governors race where each man spent $50mn propping up a rival Republican. Griffin’s candidate, Richard Irvin, lost in the primary while Uihlein’s choice, the Trump-endorsed Darren Bailey, lost to Democratic incumbent JB Pritzker by a double-digit margin in the general.

Pat Brady, the former chair of the Illinois Republican Party, said Trump’s endorsements of poor candidates, including Bailey, had skewered the Republican Party’s chances in many close races.

“Candidates matter and when you’ve got a guy like Donald Trump . . . recruiting just horrible candidates, that’s why we don’t do well. It drags the rest of the ticket down,” he said.

Brady said the preponderance of billionaire donors, such as Griffin and Uihlein, had hollowed out the GOP’s mid-tier donor base of people like him — a problem for the GOP in the long term.

“You’ve got to build relationships with people and convince donors why you should give to Republicans. You can’t do that with one phone call,” he said.

Paul Ryan, the former Republican Speaker of the House, said on Sunday that the “evidence is really clear” that Trump’s influence dented Republican performance in the midterms.

“The biggest factor was the Trump factor,” Ryan said, pointing to examples of more centrist Republican governors, like Chris Sununu in New Hampshire and Brian Kemp in Georgia, who were easily re-elected, while Trump-backed Republican candidates for US Senate in those states faltered.

However, an advantage in grassroots funding is not in itself enough to ensure victory. In the most recent election, Democrats attracted significantly more small-dollar donors than Republicans in Ohio, North Carolina and Wisconsin — all states where they ended up losing Senate races.

Erikson, the progressive consultant, noted that small-dollar donations did not always guarantee a winner: take Bernie Sanders’s failed campaigns against Hillary Clinton in 2016 and Joe Biden in 2020.

For many state races, it was more important to have a deep backbench of local donors. This was the case in Senator Susan Collins’ successful 2022 re-election campaign in Maine against a Democratic challenger who had more grassroots backers but weaker ties to the state.

“Not all dollars are of equal value,” said Erikson.