Lyudmila Shtein, a 24-year-old Muscovite and municipal deputy, is under house arrest until May and risks a two-year jail term for encouraging people to join a protest last month. She’s among more than 11,000 people rounded up in the past two weeks after the biggest show of defiance toward President Vladimir Putin in years.

As social media flooded with accounts of police brutality including beatings, a Kremlin crackdown has succeeded for now in halting the unrest triggered by the imprisonment of opposition leader Alexey Navalny. No more demonstrations are planned until the spring, but after more than two decades in power, Putin hasn’t extinguished the threat to his rule.

“If we continue to protest every weekend there’ll just be thousands more detained and hundreds beaten, and the work of our campaign offices will be paralyzed and we won’t be able to prepare for elections” to Parliament in September, said a top Navalny ally, Leonid Volkov, who’s outside the country and wanted by Russian authorities. “This isn’t what we want and it isn’t what Alexey has asked us to do,” he told TV Rain.

Putin, 68, is digging in as Navalny seeks to galvanize discontent fueled by years of declining living standards and the recession provoked by the Coronavirus pandemic. Navalny, an anti-corruption activist, has produced a series of exposés targeting Putin and his inner circle and built a following of millions in the process.

Tens of thousands of protesters took to the streets in dozens of cities across Russia for two weekends in a row sparking alarm, and provoking a violent response from authorities, who accuse Navalny of working with foreign governments to try to destabilize the regime.

Navalny has achieved the most support of any opposition politician in Russia, “though his constituency for the moment remains quite narrow,” said Mikhail Dmitriev, an economist who correctly predicted the biggest anti-Putin protests a decade ago.

For now, the majority of Russians are preoccupied by the need to survive, but as the economic situation stabilizes, “the demand for political rights and freedoms and the rule of law will grow” and more people may be willing to confront the authorities, he said.

Police officers with a mini van search a person coming out of a nearby metro as Navalny’s trial begins. (Maxim Shemeto/Reuters)

Navalny, 44, was detained as he arrived in mid-January from Germany, where he recovered from a nerve-agent attack he said was an attempt by Putin to kill him. The Kremlin denies any role in the poisoning. Navalny’s now Russia’s most famous prisoner. A court in Moscow on Feb. 2 sentenced him to two years and eight months for violating the probation terms of a 2014 suspended fraud sentence, including when he was recuperating in Berlin after a coma.

Russian investigators are also prosecuting many of Navalny’s aides and have warned they may charge him with further offenses related to other fraud accusations that could add another 10 years’ punishment.

Pushing back against international criticism, Russia has dismissed U.S. and European calls to free Navalny despite the risk of new sanctions and on Friday expelled three diplomats from Germany, Poland and Sweden for attending the rallies.

While past waves of protests also triggered mass arrests and prosecutions, the authorities have been more ruthless this time.

Lawyers say they’re getting no access to detainees, demonstrators have spent hours in police vans, deprived of food, water and even heat, and photos posted on social media showed people crammed into cells with open latrines and beds with metal frames and no mattresses. 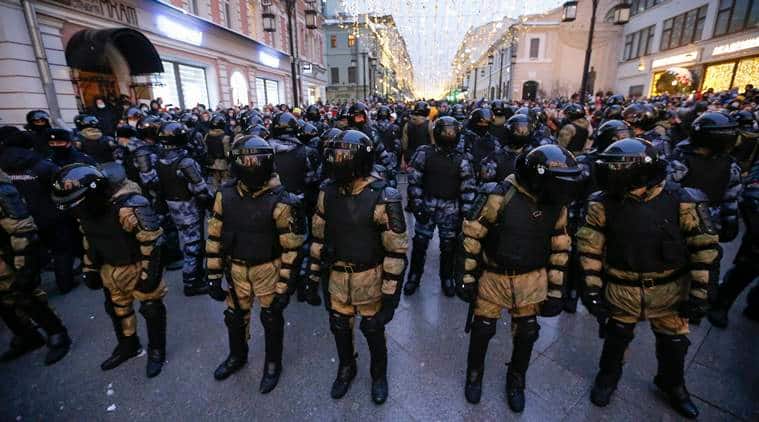 Police block the street during a protest against the jailing of opposition leader Alexei Navalny in Moscow, Russia (AP Photo/Alexander Zemlianichenko Jr)

Aliona Kitaeva, a volunteer working for a Navalny aide, said police put a plastic bag on her head, pushed her around and threatened electric shocks to force her to give the password for her mobile phone. Four officers were present in the cell that had no surveillance camera, she said.

“I was subjected to physical and psychological abuse: it amounted to torture,” she told Current Time TV just before being led away to serve a 12-day sentence for taking part in an unsanctioned protest.

Putin’s tactics may succeed in intimidating the opposition in the near future, but Navalny inside prison will become a potent symbol of resistance, said Gleb Pavlovsky, a political consultant who worked for the Kremlin until 2011.

“In the short-term the risks for the Kremlin aren’t great, but they can be very significant if Navalny turns into a constant trigger for anti-Putin protests,” Pavlovsky said. “He won’t disappear entirely and will continue to play a major role.”

With his return from Germany despite the threat of arrest, Navalny may also have upended plans by Putin for his eventual exit from the presidency because that would be too risky now, according to Pavlovsky.

Opposition rallies alone won’t threaten Putin, whose main challenge is to keep his entourage loyal, according to Olga Kryshtanovskaya, a sociologist at the State University of Management who has studied Russia’s elite for the past three decades.

“The two sides are so unequal that the only thing that can bring change is an internal coup d’etat,” she said.

Zred Media: The experts who are taking influencer marketing to a new level – The Times News