Dimple Vaishav was booked for a honeymoon in paradise. But their Maldives vacation quickly turned into an ordeal when Vaishav’s husband tested positive for coronavirus soon after they landed in the island-nation in February this year.

In a series of tweets tagging various Indian government handles, Vaishav said her husband had tested positive for Covid-19 and the two had been quarantined at the resort, and were being charged for two rooms which they couldn’t afford anymore. In another tweet, she sought quarantine in India as their hotel bill was about Rs 5 lakh for the 14 days.

Vaishnav deleted her tweets and stopped responding to press requests.

Shortly after she tweeted, Vaishnav found herself at the receiving end of a wave of criticism from social media users, who questioned the couple’s decision to travel for leisure in the midst of the global Covid-19 pandemic and then their demand that Indian government agencies step in to assist the couple financially, as well as facilitate their return to India. Vaishnav deleted her tweets and stopped responding to press requests.

Vaishnav and her husband are among the growing list of Indian citizens taking advantage of the Maldives having opened its borders in July 2020 for tourists seeking leisure travel, only to be caught unaware of the island nation’s strict health regulations. 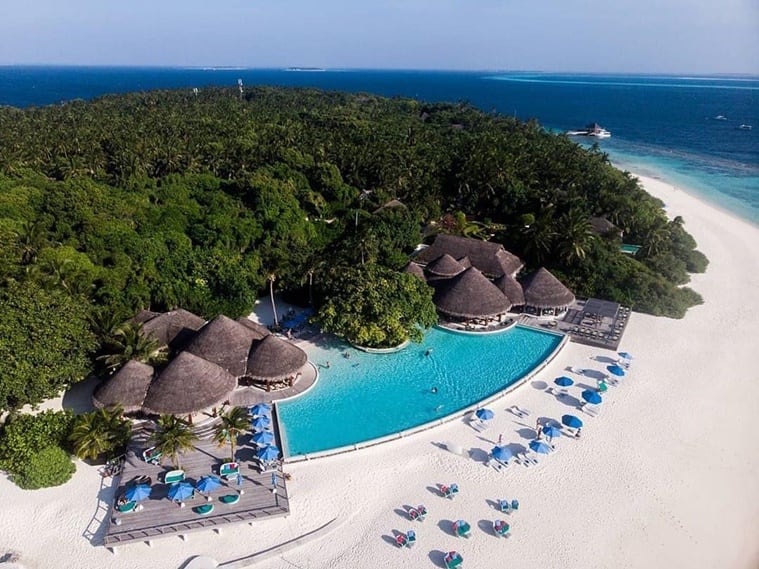 Apurv Garg, 46, planned a family vacation to the Maldives because it was the only international destination accessible. “On January 27, we went to the Maldives for four nights, booking in at the Dusit Thani. It was already expensive, but we hadn’t been on a vacation for a long time.” Being seasoned travellers, Garg’s family of four, including his children aged 18 and 19, ensured all paperwork and test results were in order before their travel. 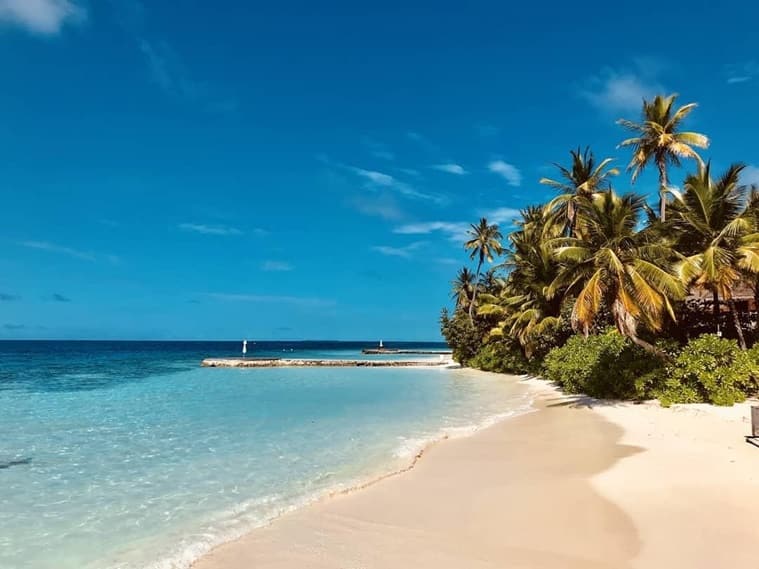 In another tweet, she sought quarantine in India as their hotel bill was about Rs 5 lakh for the 14 days.
(Image/Dusit Thani Maldives/Facebook page)

“We took a sea plane to our resort (from Malé). After two days, the general manager of the resort came to our room saying an Indian couple on our flight from India had tested positive for Covid-19,” said Garg. The family vacation that had just started, came to a screeching halt.

“My first thought was that it was a scam because we had all been tested prior to travel. But the general manager said the health department had reached us through contact tracing.”

An RT-PCR test was conducted on the family immediately after and they were all put into quarantine for 14 days inside their ocean villas. What was meant to be a four-day family vacation, would now stretch to two weeks enclosed in villas with water on four sides.

The family’s results came back negative, but they weren’t permitted to leave the resort, let alone the country. “The hotel said the Ministry of Health had to issue a letter to allow us to fly out of the country. Just 30 minutes before our sea plane was scheduled to fly us to Malé, the hotel said the ministry’s letter had not come and they couldn’t let us go.”

Garg was told that if the resort violated health ministry rules, the government could seal it shut. “Then they put us into quarantine for 10 days at our expense,” said Garg. The family reached out to people in India and the country’s High Commission in the Maldives, but there wasn’t much help forthcoming.

“The Indian High Commission said ‘I know why you are calling me’, directed me to two helpline numbers and hung up,” said Garg, indicating that the High Commission had been dealing with a high volume of calls from other passengers who had been on the same flight from India.

But there is little he can do in these cases, Rohit Rathish, Deputy High Commissioner and chargé d’affaires, High Commission of India in the Maldives told indianexpress.com. “Since COVID-19 is a highly contagious and potentially-deadly disease, the Maldives has strict regulations and guidelines on managing resorts and guest house facilities in the country. As you can see from the regulations, those tourists who have tested positive and their primary contacts are mandated to self-quarantine in the resort or guesthouse for a stipulated number of days to prevent further spread of the disease,” Rathish told The Indian Express. Apurv Garg, 46, planned a family vacation to the Maldives because it was the only international destination accessible. (Image/Dusit Thani Maldives/Facebook page)

The Indian High Commission’s protocols include establishing contact with affected tourists and ensuring their basic needs are met.

Tourists whom indianexpress.com spoke to indicated that for them, it was essentially concern about the high costs of spending 14 days in quarantine in some of the most expensive hotels in the world.

The Maldivian government says these tourists have the option of transferring to a government-operated quarantine centre, that is relatively more affordable. But it appears that the tourists, especially those on luxury holidays, are unwilling to opt for this. “There is a quarantine and an isolation facility available for tourists offering a minimum rate, but often we have found that guests prefer to stay in their booked facility,” said Mabrook Azeez, spokesperson at the Maldivian President’s Office.

A middle-aged couple from Kolkata had arrived at the W Maldives, a five-star resort in the Marriott chain, earlier this year, but following their test results, found themselves sent into government quarantine in Malé, the capital city. The couple were not available for interviews regarding their experiences, but a source told indianexpress.com that they experienced some challenges in this quarantine facility, particularly with regard to special dietary requirements. 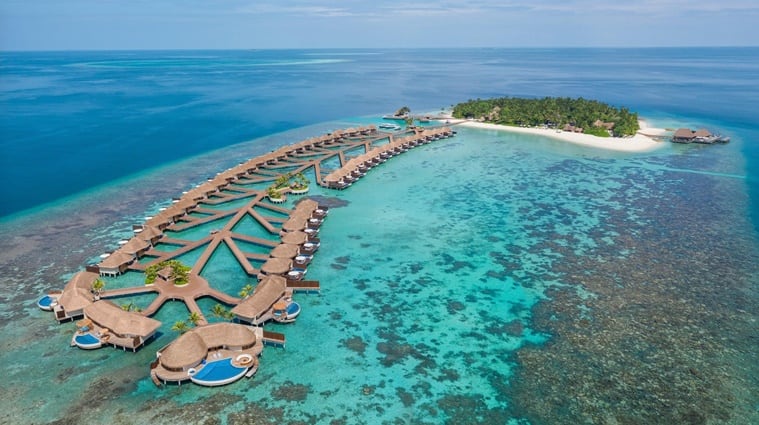 Rohit Rathish, Deputy High Commissioner and chargé d’affaires, High Commission of India in the Maldives said, “Since COVID-19 is a highly contagious and potentially-deadly disease, the Maldives has strict regulations and guidelines on managing resorts and guest house facilities in the country. (Image/W Maldives/Facebook page

A group of six tourists from Kolkata, requesting anonymity, told indianexpress.com that they experienced a “harrowing” time in the Maldives this January after one member in their group was detected Covid-19 positive soon after landing and the remaining five were not permitted to fly back to India. According to Maldives health regulations, all six were sent into quarantine.

“If a traveller has been asked to quarantine it is because they have been identified as a contact through tracing, or tested positive. Our procedure is for them to be quarantined for the mandated period. Maldives follows recommendations from WHO in contact tracing such as quarantining individuals seated two rows in front and two rows behind the individual who has tested positive. The completion of the quarantine period is a public health measure to contain any further potential spread,” explained Azeez.

After the Gargs realised that they were going to be stuck in their resort for an extended period of time, the family managed to negotiate for discounts and allowances that would bring down the total cost of their quarantine period. “But even the food is expensive, costing up to $200 per person, per day. The RT PCR test cost us $210 per person. For my family of four, we paid $840 for the tests,” Garg said. In an interview with indianexpress.com, Azeez confirmed that the Maldivian government does not bear the cost of testing, quarantining or isolation of tourists. 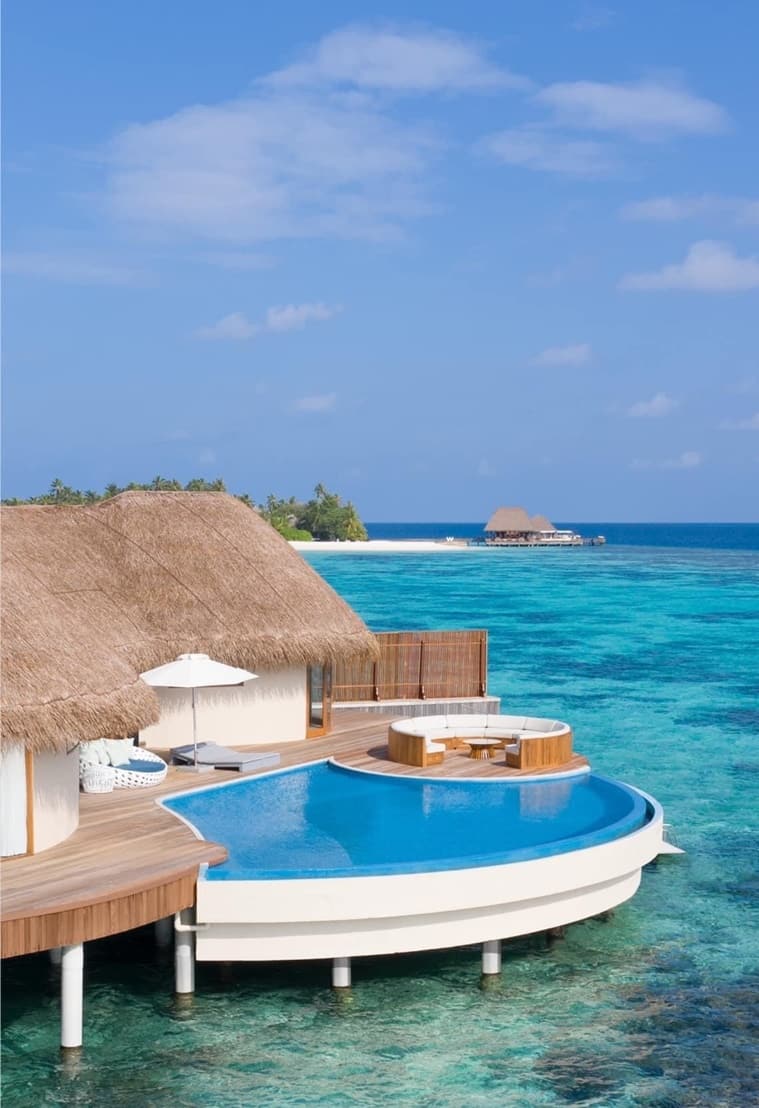 In isolation in their ocean villas, the Gargs could cycle or walk for upto 50 meters on the overbridge that connects these ocean villas with the main building of the hotel. But soon the family began receiving messages implying that they were fortunate to be stuck in paradise. “People said ‘have a ball of a time’; ‘it’s a once in a lifetime opportunity’. But that isn’t what it feels like,” Garg explained. “It was horrible.”

Still, Garg believes that his family was among those who are more fortunate because the hotel was cooperative and willing to assist. “I know of people who had to clear bills each day for their rooms during quarantine, with a credit card hold for the next day. At least we didn’t go through that,” he said. Tourists whom indianexpress.com spoke to indicated that for them, it was essentially concern about the high costs of spending 14 days in quarantine in some of the most expensive hotels in the world. (Image/Four Season Maldives/Facebook page)

One traveller who spoke to indianexpress.com on the condition of anonymity said that a holiday that would have typically cost him approximately Rs. 8,00,000 for four to five days in a luxury resort in the Maldives, ended up costing Rs 30,00,000 due to the additional expenses he incurred for Covid-19 testing, quarantine, extended stays, rescheduling flight tickets etc. The Maldivian government says these tourists have the option of transferring to a government-operated quarantine centre, that is relatively more affordable. (Image/Four Season Maldives/Facebook) page

“Since January 2021, four of our guests were suspected and placed in quarantine. They were on the same flight from India to Maldives with a passenger identified as Covid-19 positive. The positive-tested passengers stayed at other resorts. However, as a procedure mandated by the local authority, close-contact passengers on the same flight need to be monitored and quarantined in the resort. They were tested negative before and after quarantine,” said Iryna Okopova, spokesperson for the Dusit Thani Maldives.

Presently, the hotel has no tourists in quarantine. Soon after the island nation opened its borders, the hotel had experienced one suspected case of Covid-19 in October 2020. In that case, the affected tourist was sent to a quarantine facility at the hotel for 14 days and released following a negative test.

The growing number of such cases may be one reason why the Maldivian government issued a circular to tourist facilities in the country on March 5, directing them to ensure that tourists are aware of health guidelines, “especially isolation, quarantine and testing guidelines (i.e. quarantine period, estimated costs incurred, conditions for re-testing etc.).” In this circular, the country’s Ministry of Tourism added that tourist facilities were “requested to ensure and secure the payment mechanism for the isolation/quarantine period through mutual arrangements (between the guest and tourist facility) if such a case arises.”

“Stringent protocols have been put in place to ensure the safety of guests and residents in the Maldives. We urge all tourists to ensure they are up to date with the requirements of the Maldives as well as the countries they plan to travel on/return to after their departure from the Maldives. Example: whether they need to present a negative PCR test for their onward travel?” said Azeez.

Since the country opened its international borders last year, Indians have continued to remain an important source of tourism revenue for the Maldives. “A total of 62,960 Indian tourists visited Maldives during 2020, accounting for a market share of 11.3% of total arrivals during the year. As of March 6 (this year), 49,322 Indian tourist arrivals have been recorded,” Azeez told indianexpress.com. As of March 20, according to figures provided to indianexpress.com by the Maldivian government, 145 foreigners are presently in quarantine for Covid-19 in the country. (Image/Four Season Maldives/Facebook page)

The Dusit Thani on Mudhdhoo island in the Baa Atoll is surrounded by blue waters and postcard views wherever one looks. Despite the unique set of circumstances that provided an unexpected and unwelcome experience in the Maldives, Garg emphasised that it remains one of his most favourite destinations.

Still, this is one holiday that his family, like many others travellers from India, would like to leave behind them. “I asked myself, ‘what did you gain out of this holiday, Apurv?’ The answer is ‘I gained nothing’,” said Garg.