A buzz of excitement shot through Hollywood after Bob Iger returned to Walt Disney in late November, with hopes that the veteran chief executive would help his company — and the ailing entertainment industry as a whole — find its way again.

But behind the fanfare, signs of tarnish had appeared on the Iger halo since he stepped down in 2020, blemishes the activist Nelson Peltz is now making the centrepiece to one of the US’s biggest proxy battles in years.

Exhibit A in Peltz’s case is Iger’s $71bn acquisition of 20th Century Fox from Rupert Murdoch in 2019, which the investor has portrayed as a rash boom-time deal that saddled Disney with $42bn in debt, limiting its room for manoeuvre.

Peltz has also seized on Iger’s botched handling of his own succession, which became such a drawn-out affair that some promising candidates left the company. Relations between Iger and his chosen successor, Bob Chapek, were famously strained and ended with Chapek’s ousting last year.

These episodes from Iger’s past are some of the core arguments that Peltz, known for a relentless $100mn activist campaign against Procter & Gamble, plans to marshal against one of the most lauded executives in corporate America.

“While Disney faces a rapidly evolving media environment [ . . . ] we believe the company’s current problems are largely self-inflicted,” Peltz, whose firm Trian Fund Management has bought a stake worth about $900mn, wrote to the board this week.

The hostile letter — and a pre-emptive board reshuffle by Disney — are the culmination of months of behind-the-scenes tension. At stake will be not only the media group’s strategy at a pivotal point in its transition to streaming, but the legacy of Iger himself.

After his attempt to gain a seat on the Disney board was rebuffed on Wednesday, Peltz did not go as far as to call for Iger to resign. But in his case to investors he depicted Disney as a company in “crisis”, with its share price trading near eight-year lows.

Peltz’s charge against Iger is that his vaunted expansion of Disney’s empire has come at the cost of performance and margins. In a presentation titled “Restore the Magic”, he points out shareholder returns over the past decade are not even half of those of the S&P 500.

While dealmaking helped add almost $24bn in revenue to reach $83.7bn over the past five years, Peltz alleged costs of services and products have risen by two-thirds, operating margins have almost halved and free cash flow has fallen 90 per cent. The dividend, paid steadily for more than half a century, has meanwhile evaporated during the pandemic.

“We believe Disney is at a crossroads: it can decide to fight the addition of one qualified board member” — namely Peltz — or “work together with Trian to create sustainable, long-term value at Disney,” according to one slide.

Disney’s flinty response to Peltz, who described it as “among the worst” examples of shareholder engagement he has ever seen, could hardly have been more different to its treatment of another activist investor last year: Daniel Loeb of Third Point.

Disney officials characterised the discussions as friendly with Loeb, who was ultimately successful in placing an experienced media veteran, Carolyn Everson, to its board last autumn. Loeb dropped some other demands, such as his call for Disney to spin off the ESPN sports network.

By contrast Disney plans to stand firm on Peltz’s demands, who disclosed his stake weeks after Loeb had secured the Everson appointment. “We’re not going to back down,” said a person close to Disney. “We will fight him if he wants to fight.”

Peltz is withering about Disney’s current strategy, claiming its streaming plans are flawed, costs are out of control and park customers are being punished with short-sighted price rises to compensate for the weak performance of the rest of Disney’s business.

But Disney insiders are giving him short shrift, pointing to Peltz’s lack of experience in media and technology. “We don’t know why he would be helpful on the board,” said one.

Peltz had planned to launch his salvo on Thursday, but Disney got out a day ahead by announcing a board reshuffle and its opposition to Peltz’s request for a seat.

It leaves the Disney’s defence in the hands of Nike veteran Mark Parker, who will replace Susan Arnold as chair.

Disney said Arnold was not standing for re-election because of a 15-year term limit. But her departure potentially deprives Peltz of one significant line of attack against Disney and its board.

Arnold had drawn scrutiny last year as Chapek became embroiled in a messy fight with Florida’s governor over the so-called “Don’t Say Gay” legislation, which had prompted an outcry from Disney’s LGBT+ employees. After a wave of negative publicity for Disney, Arnold extended Chapek’s contract — only to dismiss him abruptly in November.

In a statement, Parker said his top priority as chair would be to “identify and prepare a successful CEO successor” and that the process “has already begun”. 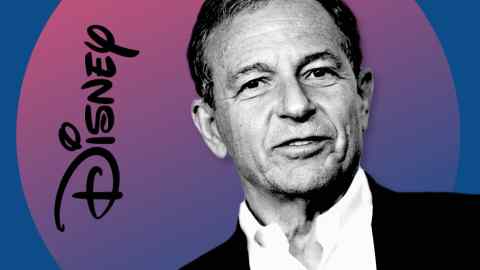 Iger is not expected to give many details about his strategy for the company until after the company reports its results on February 8. But he has already announced plans to reorganise a Chapek-era management structure that drew the ire of Disney’s studio heads. The company is also beginning to implement a cost reduction plan.

Disney insiders blasted Peltz for not presenting a detailed plan of his own to improve performance. “It’s really surprising that there are critiques in there, many of which are inaccurate or are spun, but there’s literally not one solution,” said the person close to Disney. “Peltz has no plan.”

Peltz points to its three previous proxy battles — Heinz in 2006, DuPont in 2015 and P&G in 2017 — as evidence that he can work with companies to boost results. “Management’s views of Trian and Nelson Peltz changed dramatically after we began to work with them to enhance shareholder value,” Trian’s presentation claims.

But Disney insiders say his experience at those consumer companies such as P&G has no relevance.

“Peltz is a smart, successful investor and has a good record in commodity consumer brands,” said the person close to Disney. “But the notion that selling soap and detergent is analogous to what Disney does, which is creating global [intellectual property], is just not true.”