Peace reigned around Notre-Dame cathedral in Paris over Christmas as reconstruction work to repair damage from a devastating fire almost four years ago paused.

A short walk away in the small church of Saint-Germain l’Auxerrois, Notre-Dame rector Olivier Ribadeau-Dumas celebrated mass while eagerly anticipating his congregation’s return to the cathedral in two years’ time.

“In a difficult and fractured world, the reopening will be a fantastic symbol of hope,” he said in an interview.

The 61-year-old priest has a leading role in Notre-Dame’s renaissance. He represents the Catholic Church in the state-backed entity charged with rebuilding the 13th-century Gothic masterpiece, liaising with the government and local authorities over everything from creating parking spaces to beefing up security. He is also part of the committee that will pick designs for the interior, lighting and new altar, and will hire 70 employees to staff the cathedral once it reopens.

But Ribadeau-Dumas sees his most important job as ensuring that the cathedral, which is scheduled to reopen to the public in December 2024, maintains its dual role as a living place of worship as well as one of the world’s most visited historical monuments.

“The outpouring of emotion when the fire broke out showed Notre-Dame belongs not just to Catholics or the French but to all of humanity,” he said. “But it was not built to be a museum or a masterpiece but a functioning church. We want visitors to see the faithful at prayer or receiving the sacraments, not to separate them.”

The government expects the number of visitors to Notre-Dame to swell from about 12mn a year to 14mn once it reopens as interest increases following the long closure. Officials are already working out how to accommodate them.

That preparations have reached this stage confirms a recent government audit which reported that the project was running largely on time and within budget.

The work is being funded by a public campaign that raised around €840mn, including big donations from French billionaires such as LVMH owner Bernard Arnault and the Bettencourt family behind cosmetics group L’Oréal.

The clean-up phase has cost some €150mn and the reconstruction is expected to cost around €552mn, said General Jean-Louis Georgelin, who heads the state-backed entity in charge of the project. “Notre-Dame is really being reborn,” he told a senate oversight committee on Wednesday.

The French state, which has owned Notre-Dame since 1905 after a law was passed separating church and state, is responsible for the structure’s reconstruction, while the Catholic Church is overseeing the interior.

The day after the fire in April 2019 as the cathedral was still smouldering, President Emmanuel Macron declared it would reopen to the public within five years. The goal seemed outlandish at the time given the scale of the damage.

The blaze sent the 19th-century spire erected by French architect Eugène Viollet-le-Duc crashing into the interior, destroying the roof, altar and much of the nave.

To extinguish the flames, firefighters were forced to inundate the delicate stone structure with massive quantities of water, prompting some architects to later worry about its integrity.

Dangerous quantities of lead were also released from the ashes of the spire, adding to the cost and complexity of the clean-up as a strict lead safety protocol was put into place.

The past four years have been spent cleaning the stone and shoring up the structure. The main reconstruction phase will begin in earnest this year. Some 500 workers will build a vaulted ceiling, a latticed framework of wooden beams to support it and a new spire. To enable this, a 600-tonne, 100-metre high scaffold is being built inside.

Meanwhile, hundreds of specialists across France are working to restore treasures such as the cathedral’s massive metal and wood organ and smoke-stained paintings.

While construction advances, the Catholic Church has asked artists to submit designs for a new altar, a cathedra — a raised throne for the bishop — the baptistery and other liturgical furniture.

Ribadeau-Dumas said he hoped the designs would meld function and tradition with hints of modernity, as Notre-Dame had always evolved over centuries. “They should be consistent with the history of the cathedral and not be disruptive, but should also be alive to our times,” he said.

A commission of 18 advisers will evaluate the submissions, with the archbishop of Paris making the final decision. 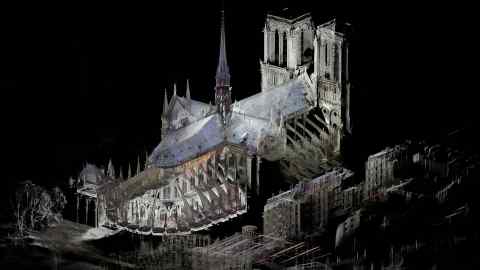 They will hope to avoid skirmishes like the 2021 dispute over a proposal for Notre-Dame’s hundreds of wooden chairs to be replaced by mobile benches equipped with lights and speakers. Some 100 French intellectuals and artists put their names to an article in Le Figaro warning against “the Disneyfication of Notre-Dame”. Out went the benches, back came the chairs.

Ribadeau-Dumas said such intense debates were to be expected given the emotive nature of the cathedral. But he predicted the public would be filled with wonder rather than anger when they saw the renovation. With the stone walls and stained glass windows meticulously cleaned, Notre-Dame will be brighter than it has been in centuries.

“The cathedral will be completely different,” he said. “Those who hadn’t seen it before will say that it is very beautiful. Those who had will see it in a completely new way.”

Asked whether some visitors could be disappointed or shocked by the changes, he added: “Notre-Dame can only amaze.”

This article was amended after first publication. The cathedral’s spire was erected in the 19th century, not the 18th.