The post-Brexit UK economy is facing a shortfall of more than 300,000 workers as the result of ending free movement of labour with the EU, according to a new estimate by leading researchers.

The joint assessment from the UK in a Changing Europe and the Centre for European Reform think-tanks said that the ending of free movement was constricting the UK economy and “contributing significantly” to labour shortages in lower-skilled sectors, including logistics, construction and hospitality.

Jonathan Portes, professor of economics and public policy at King’s College, London, who co-authored the report, said the shift in migration patterns was “a feature, not a bug”. “The longer-term impact on the UK labour market will be profound,” he added.

After the UK left the EU it shifted to a points-based immigration system that allows skilled workers earning more than £25,600 per year or £10.10 per hour to obtain work visas, but the research found the system was “not liberal enough” to compensate for the loss of EU workers.

The estimates emerge as the government takes steps to try and tackle the effects of the so-called “great retirement” caused by the Covid-19 pandemic, which has left 500,000 more people economically inactive than in 2019.

Business groups representing affected sectors, such as lorry driving, hospitality staff, construction and agricultural labourers have asked the government to relax the visa regime by expanding the “shortage occupations list”, but largely without success.

The research assessed the shortfall in workers by using data in the annual population survey to compare actual numbers of workers from the EU and the rest of the world against an estimate of the immigrant labour force had the UK not ended free movement. By June 2022 they found a net loss of workers equivalent to 1 per cent of the UK workforce — about 330,000.

However, certain lower-wage sectors were disproportionately hit, with “transportation and storage” seeing a shortfall of 128,000, or 8 per cent of total number of workers in that sector. For “accommodation and food” the figure was 4 per cent; while for “wholesale and retail” it was 3 per cent.

Co-author John Springford, deputy director of the Centre for European Reform, said the reduction in labour supply would constrict the economy. “Employers will respond with some combination of higher wages and prices, and less output, especially in work that is hard to automate.”

Business groups argued the report showed that, while the government needed to do more to get UK people back into the workforce, there were clearly limits to domestic labour supply.

Jane Gratton, head of people policy at the British Chambers of Commerce, said competition for workers was feeding inflation and urged the Home Office to reform the shortage occupations list.

“Politicians need to be realistic about the skills we need from outside the UK. Brexit has given us control of our borders and the government must use the appropriate levers to help struggling businesses get the people they need,” she added.

Logistics UK, the industry body, said it had worked hard with the government since the 2021 lorry driver crisis to drive recruitment to the industry, conducting skills boot camps and running publicity campaigns to attract younger drivers.

However, policy director Kate Jennings said her organisation was still pressing the government to introduce a new skills levy to fund training and “including select roles, such as HGV drivers, on the shortage occupation list”. 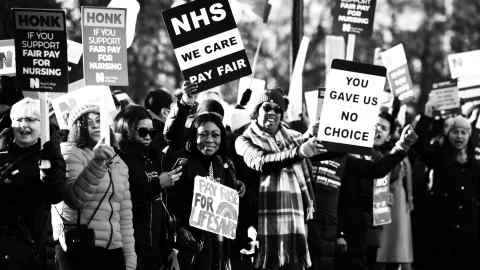 The CBI, which represents UK industry, agreed that the shortage occupation list needed updating but added that the UK also needed “long-term productivity boosting measures” to address the root cause of the problem.

Looking to the future, Portes and Springford said there was uncertainty around several areas of the UK labour market. These included how a recent influx of immigrants from Ukraine and Hong Kong would feed into the workforce, and whether or not EU workers who left the UK during Covid-19 but had permanent “settled status” rights under the EU-UK withdrawal agreement would come back to the UK.

The Home Office said: “The public rightly expects us to control immigration, which is why our points-based system delivers for the whole of the UK by balancing prioritising the skills and talent the UK needs with encouraging long-term investment in the domestic workforce.

“We have expanded the skilled worker route to include medium skilled jobs and it now covers 60 per cent of jobs in the economy.”

Video: The Brexit effect: how leaving the EU hit the UK